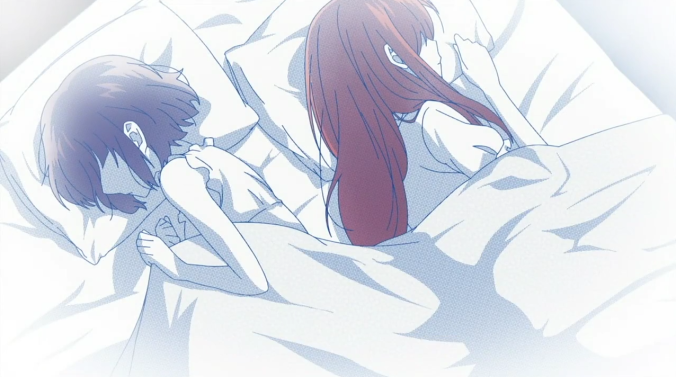 We’re now about a fourth of the way through the season and it looks like we’re in it for the long haul. The rest of the episode threes came in this week and those episodes for their respective shows were actually pretty strong. Continuing on with the trend, I found Demi-chan and Gabriel Drop-out pretty weak but the rest of the shows have been good. I’d love it if I got five shows to look forward to every week, but what can you do.

Any who, let’s talk anime.

The residents of the Kobayashi household found themselves in a bit of a squeeze this week. With Kanna joining them, Kobayashi and Touru’s tiny apartment wasn’t quite big enough for the three of them. And so, this episode featured the girls’ house hunting adventures and subsequent settlement in their new home.

Maid dragon continued to impress this week with a similar ratio of silly to heartwarming as in last episode. The jokes were excellent as usual, especially with the introduction of Touru’s two dragon friends. I was really looking forward to Fafnir’s inevitable introduction and I was not disappointed. 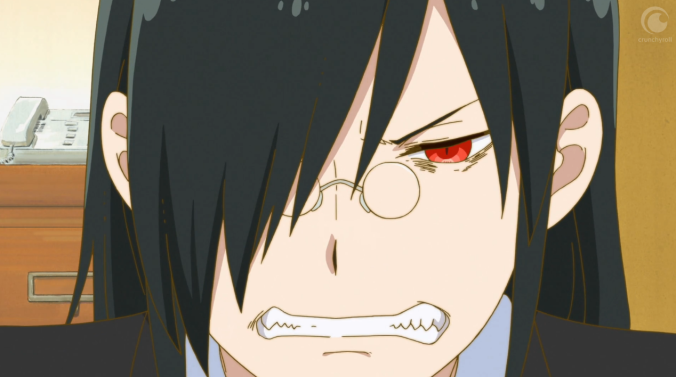 Seriously – this man has no chill.

There wasn’t too much to do with Lucoa this episode but the small moment she had with Kobayashi was really sweet. Including this little conversation, Maid Dragon showed off quite a few heartwarming Touru and Kobayashi moments this week. Finding one another clearly didn’t just benefit Touru and it was nice to see. Maid dragon’s clearly got the right formula for my enjoyment and I’m looking forward to it every week.

This episode of KonoSuba put the spotlight on our original two main characters. With Megumin totally incapable of helping in exploring a dungeon and Darkness fighting off a dress for the good part of two episodes, Kazuma and Aqua found themselves stuck with each other in the dark this week.

In a change of pace that even Kazuma found weird, Aqua showed off her true goddess-ness in the dark depths of the dungeon – proving extremely useful in their quest. The show spotlighted the good parts in Aqua for both Kazuma and the audience and that was cool to see (even if it was overturned almost immediately afterwards).

I also really liked Keele and his little story and I was surprised that there wasn’t some horrible betrayal by him at the end. With the crazy amount of horrible people in the show, I guess I was expecting very little from the new character. His kind end and the generally positive spotlight on Aqua really shook things up this episode reminding us that this show can actually have some heartwarming moments.

And I was expecting to just post memes this week.

Despite my worries from last week, I found this week’s episode of Scum’s Wish to be pretty fantastic. The show really knows its characters well and properly presents their conflicts and feelings in a compelling way. Hanabi in particular is quickly becoming one of my favorite characters this season. The show frames her as an intelligent, self-aware girl with high standards for the actions of herself and others. She feels like a much deeper and realistic character than most other characters in the anime that I’ve watched. There was one scene in particular that really enjoyed. The morning after their sleepover and after Ecchan leaves, Hanabi goes to buy something from the local store. With the events of the sleepover fresh in her mind, she walks down the sunlit road to the store while trying to sort out her feelings.

In episodes past she criticized the wishy-washy feelings of others. Splitting your love between two people was unthinkable for her, as a person with a strong singular love. This episode she found herself in the exact position of those that she criticized and that feeling really sucked. Her confidence in her love was something central to her and all of that was shaken by her feelings (platonic or otherwise) for Ecchan. In this situation, anyone would look for some kind of comfort and for Hanabi, Mugi was the answer.

Speaking of Mugi, this episode we learn about his past relationship with a senior, presumably at his middle school. This little story felt a little weird, but I did appreciate it for what it was. It showed us that at some point in Mugi’s romantic history, he was swayed away from his primary love for his tutor towards another person. This, followed by Hanabi’s spontaneous visit presented the possibility of a future between the two. I’d also like to note that Hayakawa’s little conversation with Mugi and final decision said a lot about how her feelings and thoughts on their relationship. She wanted to be seen as a target of love and not just sex and found that with Mugi. With future looming ahead, she didn’t want to ‘rob him’ of anything else and decided to leave. I liked her little story.

Otherwise, there were only a couple minor things that weren’t great about the episode for me. The comedic timing of this show is so far off sometimes and it really kills the mood. I think that Scum’s Wish would be a much weaker show without any funny moments, but it certainly needs some work. The sleepover also felt a little rushed. Ecchan didn’t feel super developed and going into the episode, I wasn’t entirely attached – even with the flashback scene. It felt like there needed to be another episode to develop the relationship between the two before going into the drama.

Things are looking good for Scum’s wish and I’d like to see more.

Ugh. I really want this show to be good, but sadly it’s not. Demi-chan this week continued on with its ham fisted drama and weird harem-y vibes. Some of the problem might be from the translation, for example the phrase “I heard mean things about me” could have been rephrased to sound less juvenile, but the content would’ve remained the same, so it wouldn’t have helped a lot. The problems that the girls faced didn’t seem like demi problems but more so middle-school girl problems so they were neither relatable nor interesting to me. There are shows that can make these kinds of problems impactful, but Demi-chan really didn’t. 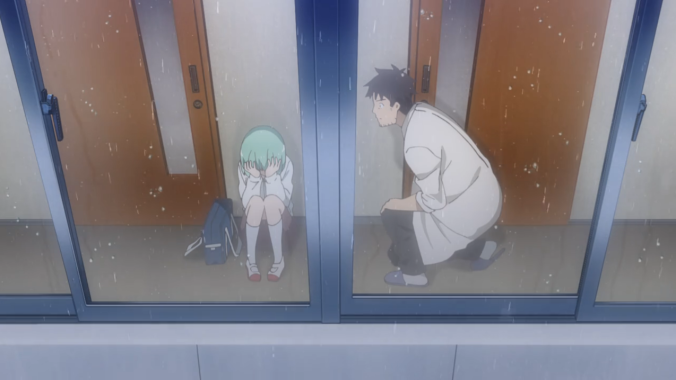 Drama aside, this episode managed to make me even more uncomfortable than last week from its weird under-aged harem vibes. It seemed like Takahashi was totally uninterested romantically in any of the girls, but I got less of that impression from this week’s episode. Another problem I had with the show was its strange conversational pacing. The natural conversations from the first episode seemed to have disappeared in select scenes of this episode and it hurt the immersion that much more.

There was one saving grace in the episode however. I did like the conversation between Takahashi and Himari. They talked about acknowledging and respecting both sides of the identities of Demis – the human side and the Demi side. This is something that can be extended to a lot of issues in real life and showed us the potential that the show has thematically.

There has to be a reason why I liked the manga for this show so I’ll continue, but it looks like it’s going to be a long and bumpy ride.

I’m not sure why I’m still watching this show. Gabriel Drop-out’s fourth episode featured a beach outing in the first half and an impromptu study session in the second – classic scenarios for an anime summer. The first half honestly bored me to tears. The jokes weren’t funny and the characters were as one dimensional as ever. I realize that this is a DogaKobo moe show so I really shouldn’t be asking for so much in a show like this, but it’s still pretty disappointing. The second half of the show was a little better, grabbing some of my interest with a partial explanation on how the Gabs fell so far from her personality in episode one. The show cheap-ed out on the explanation, saving the second half of the story for the next episode and I’m still pretty curious so I’ll probably give it another watch. 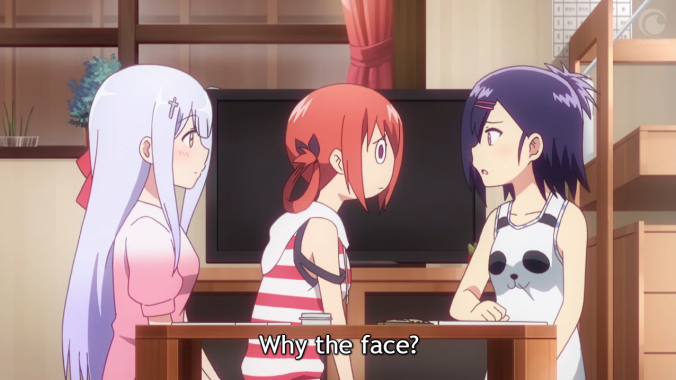 And that’s this week. There still a bunch of shows that I’m looking forward to so I guess this season isn’t a bust after all. I’ll probably be dropping Demi-chan and Gabriel Drop-out pretty soon so that’ll make this weekly thing pretty bare. I watched the first episode of Bang Dream and liked it so maybe that’ll replace something or I might just pick up ACCA again, who knows.

Either way, that’s all for now. Thanks for reading!