I’m writing this one off the back of my update post and I have to say, the reception to that one has really reignited my passion to write! Thanks again to everyone for all the support. That being said, it’s been a couple days now and I’ve certainly been brought back down (I really need start writing these things on the weekend). Any who, appropriately enough, the anime this week seems to have taken a bit of a nose dive for me. Scum’s Wish and Maid Dragon had good episodes but nothing that’s lived up to my expectations thus far, and the rest of the shows felt mediocre at best. Only three more months ‘til Spring-season, but this is what we’ve got. So enough chit-chat, let’s break it down.

This week’s Maid Dragon put a focus on our favorite tiny dragon Kanna and her elementary school adventures. The first third of the episode followed the Kobayashi family’s shopping trip for Kanna’s school supplies. I enjoyed this part of the episode probably the most out of its 23 minute run time. The small moments of careful consideration that Kobayashi and Kanna had for one another were pretty adorable and showcased the closeness of this patchwork family. Also included in this slice of the episode was some social commentary, not uncommon in the series – this is something that always catches me off guard and makes for either some hilarious one liners or good, serious scenes.

The rest of the episode was mostly filled with the comedic skits that come frequently in Maid Dragon. I still enjoy these bits a lot and find them pretty funny, but they don’t quite compare to the nicer atmospheric character moments that the series is capable of. That being said, the show works well with a good balance between the two. This episode felt a little heavier on the comedy end which is probably why it felt weaker for me. Maid Dragon’s still quite the solid show so I’m looking forward to more.

You know, I like Darkness – she’s shown that she’s pretty levelheaded and smart when it comes to most things. She a solid pillar of the group that keeps them grounded when they need it the most, reflecting her role in the group as the main tank. She cares a lot for Kazuma, Megumin, and Aqua, and will never betray them regardless of the situation. She’s a respectable character that has the potential to move the group forward in their goals an- 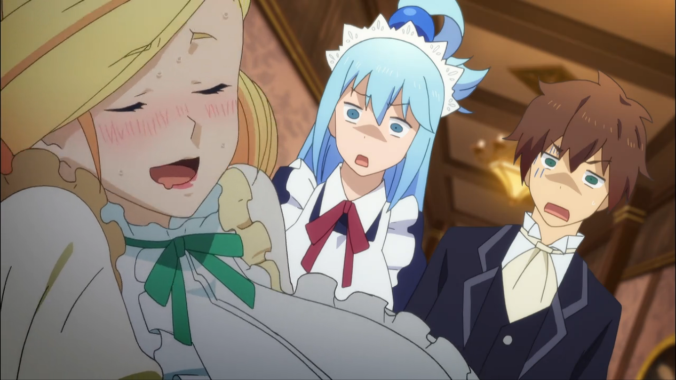 This week’s Scum’s Wish started off from the point of view of our not-so-lovely Akane Minagawa, the apple of Mugi’s eye. A majority of the episode was dedicated to exploring Akane’s past and present, leading to the events right at the end of the last episode. I didn’t know how much I would dislike the perspective of this kind of highly toxic person. Akane’s lust, greed, narcissism, and complete lack of empathy goes against a lot of what I hold near and dear to myself – so of course, this episode was highly uncomfortable (and really interesting) for me. The episode seems to suggest that Akane was always this kind of person, but I would like to have seen otherwise. If was shown to be like Hanabi in the past, she would be a more direct reflection of Hanabi’s future if she decides to take advantage of the people who love her like Akane did. I’d also like to mention that Akane’s raison d’être in the context of her job sounds real silly when you think about it: “I’m here to seduce away the love interest of little girls and watch them cry. Gahaha.”

Swapping over to my more favored characters, I liked Hanabi’s reaction to Akane’s little demonstration. She knew that something was up and that Akane wanted to hurt her through Narumi’s confession. She understood Akane’s intentions with the set up and knew that she didn’t care much for Narumi but it still hurt her a lot. No amount of reasoning could reduce the pain she felt and so she went to the one source of shelter she had, Mugi. But right before she knocked on his door, she decided against it. Hurting Mugi simply for her selfish needs wasn’t something that she wanted to do, she cared about him after all. This was the kind of thing I really like to see in people and characters like Hanabi.

Sanae’s bit, the part that followed after Hanabi leaves Mugi’s apartment, felt right in its occurrence but Ecchan’s aggressive personality wasn’t something that I expected to see. There were bits and bobs in this scene that reflected the Ecchan I came to know from her screentime – she still cared very much for Hanabi and treated her with the love and comfort that she needed for the moment, but her aggression and lust was a little surprising. I do wish that there was an episode in between the second and third that explored Sanae character and her relationship with Hanabi and bit more, but what can you do.

Demi-chan put the spotlight on Yuki the yuki-onna this week. Following the conflict last week with the girls who gossiped about her behind her back, this episode focused on Yuki’s fear of her powers as a yuki-onna. This episode would serve as the small climax to both Yuki’s internal struggle with her identity and her character arc in the narrative as a whole. Unfortunately, I didn’t really care too much about Yuki and so this climactic point kind of fell flat for me. Although it was built up from episode one, her story still felt a little too quick in its resolution. It seemed to me at least, that this conflict of hers was something that has been long standing for her so how was it that one simple talk with her teacher was enough to clear her doubts? She effectively 180’d in her personality after her talk with Takahashi. I’m sure that there’s been worse offenders when it comes to this kind of thing, but I really hoped that Demi-chan would be able to hit the emotional high points like many other shows in this genre.

Outside of Yuki’s story, the rest of the episode was filled in with some Hikari-Takahashi antics and some fluffy moments between the three girls. I’m getting a lot of this kind of stuff from other shows this season (which do it better), so this part of the episode didn’t do much for me. I’m still holding out on the hopes that Saki’s material works out better for me, but at this point, I kind of doubt it.

I was wondering how Gabriel Drop-out was going to continue on 8 more episodes with their relatively one-note characters and non-existent plot, but the show managed to freshen things up a little this week with the introduction of a new character. Tapris, Gab and Raphi’s junior in angel school came down to look for our lovely fallen angel this week. Tapris is a newbie to the whole human thing so her naivety, needless caution, and paranoia was funny to see. Since the show skipped past this part of the other character’s earth-bound lives, Tapris’ adventure felt new and the jokes were fresh. Her inevitable meeting with the main characters went as expected and it turned out to be pretty funny. I had more than a couple good laughs this episode so I’ll be willing to continue with this show for a little while. I do hope that Tapris is enough of an addition to make things a little less mundane, but we’ll have to see.

And that’s it for this week. Things are looking just okay anime-wise. I’m really only looking forward to Scum’s Wish and Maid Dragon every week now, but I don’t really plan on dropping (or picking up) anything more so hopefully the rest of the shows surprise me later in the season. Anyways, this thing is supposed to be up already so I’ll take my leave now.