With the rising temperatures and sunshine coinciding with my first long weekend in about two months, I was looking forward to some good anime this week! Unfortunately the universe has to balance out happiness somehow right? Anime this week was definitely not fun with Maid Dragon’s unexpectedly weird episode, Scum’s Wish’s seriously uncomfortable episode, and really mediocre episodes for the rest. I don’t really like to write about my unhappiness with shows since it’s not fun to think about or to hear about if you actually liked the episode. That being said, I’m still holding on to some of my determination to put this thing out until the end of the season.

So without further ado, let’s get this over with.

Maid Dragon caught a little controversy this week with some dubious scenes involving little Kanna and her elementary school friend. I had heard about this right before I watched the episode so I was going in prepared for the worst. What I got was not as bad as I expected, but still a little disappointing. The first third of the episode had Kanna, Touru, and Kobayashi over at Riko Saikawa’s house for a visit. We were introduced to Riko’s sister – who is as much of a maid-otaku as Kobayashi is, and the two of them hit it off (to the dismay of Touru). While the adults were off chatting, Kanna and Riko hung out in Riko’s room and engaged in some moe-blob-cutsy-ness. This part was all fine and dandy until Kanna decided to push over Riko in classic shoujo-manga fashion. The scene was meant to be a joke, but it turned out to be a lot weirder and more uncomfortable than intended and I can see why there was some uproar about it. I did also hear some complaints that this scene was also completely out of character for Kanna, but wouldn’t go so far as to say that. Narrative-wise Kanna’s actions at the very least made a little bit of sense. Kanna’s been looking to find the kind of closeness that Kobayashi and Touru’s found together and she was looking for it in Riko. Touru’s not the greatest role model however and her sexual advances towards Kobayashi in the plain view of Kanna was probably what led to this moment. I don’t doubt that Kanna’s relationship with Riko will be expanded on later in the series but I hope that they take it in a more serious direction. Something like, teaching Kanna what exactly it means to love and respect and to have someone you love like with Kobayashi and Touru.

Moving forward in the episode, I was surprised to see that the second third of the episode was even weaker than the first. This part featured Lucoa and her adventures in the human world. As we would expect, Lucoa has also found a person to attach to in Kobayashi’s world. Shouta the – well shouta – was introduced this episode. As we find out, he’s a mage-in-training and runs into Lucoa in the midst of his demon summoning ritual. His pre-pubescent-ness and Lucoa’s voluptuous-ness were the driving force of the comedy for this part of the show. I didn’t really find this very funny or interesting so I found this third of the episode to be mostly mediocre. The best part of Lucoa as a character for me is her maturity and the care that she gives for her friends but sadly this part of her was largely ignored for the sake of comedy. This section of the show wasn’t a complete waste however. There was a scene in which Shouta was explaining he need to grow stronger as a mage in preparation for his family’s eventual return to their original world. Sound familiar? As he was explaining, the camera panned down from Shouta’s face to Touru, Lucoa, and finally Kobayashi, possibly foreshadowing a conflict involving Touru’s return near the end of the series. So that was cool to see.

The final third of the episode made up in full for the less than spectacular first two parts with a look at Fafnir’s daily life after moving in with Takiya. He’s fallen very far into the realm of gaming and has found himself in a pretty cozy place. His interactions with Takiya, while still a little rough, are largely natural. Fafnir has been described to us as an untrusting, violent, lonesome dragon with a deep hatred for humanity but he’s somehow found himself comfortably living with a human. And this was due in no small part to Takiya. Takiya works to continue to pursue what he’s passionate about and isn’t afraid to show it off. Plus, he’s got sensitive enough to figure out how to navigate Fafnir’s hostility. Fafnir’s thorns have grown from his past experiences but now he’s found a legitimately kind and sincere person to live with. He’s taken down some of his walls and it’s great to see. The scene with him in the bath almost dozing off was pretty damn adorable.

While the jokes can be hit or miss, Maid Dragon’s strengths lie in its ability to portray familial love, friendship, and romantic love in an earnest and heartwarming way. If for nothing else, I’ll gladly continue watching Maid Dragon for this kind of thing. 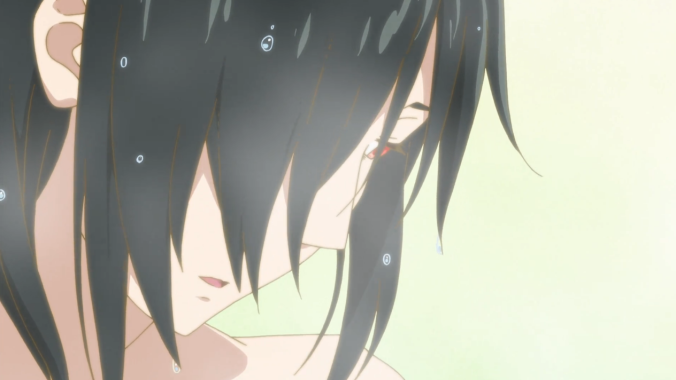 Scum’s Wish took its namesake this week with just about every character doing some terrible things. After she learned that Akane and Narumi had sex, she decided to ‘take everything’ from Akane through the same means that Akane’s taken Narumi from her. This petty act of revenge started with Mugi and continued with Akane’s tutee, the one we met at the restaurant. Hanabi decided to start dating Mugi ‘for real’ securing him as her boyfriend. Then after running into Takuya, she decided to try and get his interest too. Hanabi’s descent down Akane’s path was a little heartbreaking for me. I care about Hanabi and it’s clear that she realizes her destructive actions, but it’s much easier to think about than to stop. With even Ecchan deciding to pursue her own ambitions, Hanabi doesn’t have a whole lot of ‘good’ people left to depend on. Hanabi looks to be quickly self-destructing and it’s really hard to watch.

Speaking of Ecchan, she was revealed to be a lot more messed up than I originally thought. She’s resigned herself to be nothing more than physical comfort for Hanabi and is okay with it. Her relentless pursuit of Hanabi was uncomfortable and sad to see.

All the characters in Scum’s Wish put a large focus on love and sexuality. Relationships are central to their identities and their actions and thought reflect this, like with Hanabi’s use of the word ‘everything’. I’m well past the point in life where this kind of thing is super important to me so I surprised to see how easily I empathized with the characters. The atmosphere of the show was dark and uncomfortable, but I’ll keep watching in the hopes that things will change.

Demi-chan’s (7) moved over to this section for the week with a pretty terrible and kind of offensive episode. Putting aside the content of the episode, the conversational flow, pacing, and general focus of the show hasn’t gotten much better since its decline in episode 2 and that make Demi-chan a lot harder to get through. I would have dropped this show a long time ago if I hadn’t read the source material. That being said, I’ll likely continue following it until the end. Watching this show has been something like a case study on how my interests and tastes have changed since I read the manga.

There wasn’t a whole lot to talk about again this week with KonoSuba (6). The second half of the episode felt pretty similar to an episode in the first season so, while it was entertaining, there wasn’t really anything new.

Gabriel Drop-out (7) maintained its same-y-ness this week with an episode focused on Vigne. Her parts were cute, but the recycled jokes have long since gotten old. I hate dropping things so late in the season but I’d hate to write another paragraph like this next week so consider this show dropped (at least for write-ups).

And that’s all I got for this week. This has really become the Maid Dragon/Scum’s Wish write up hasn’t it? I’ve been thinking about forgoing this whole thing and just writing up something for each of them every week, but that might be a little closer to actual review than I’m comfortable with right now. Not to mention that Scum’s Wish is getting harder and harder to talk about at length.

Anyways I’m late in posting this thing (as usual), so we’ll end it here. Thanks for reading!