Episode 8 of Re:Creators made waves in my corner of the anime community in a way that I certainly didn’t expect. The show’s one hell of a spectacle which is not a surprise given some of the big names on staff, but Re:Creators delivers from its action-oriented, wide-reaching production, ideas that are honestly really interesting. The show doesn’t spend too much time dwelling on these things though and I honestly can’t say for sure that the show has a concrete message, but it’s still fun to speculate. This episode in particular ended off in such a way that one could simply write it off as shock factor, but I’d like to think that there was a little more meaning to its explosive end.

As one might expect, given its title, Re:Creators is an anime by creators and for creators. Its premise seems to tell the story what happens when our creations, that which we hold near and dear to ourselves – go out into the world, for all to see. They are a reflection of our talent, our backgrounds, and ourselves in our entirety. All to be judged by a sea of strangers. For Matsubara and Nakanogane, Marine and the other creators, their works have been accepted by the audience – their living characters are literal proof of their success. But for Setsuna and Souta, the prospective creators, their works have either been rejected, ridiculed, or have never seen the light of day.

And this sets the stage for our inevitable conflict.

Mamika can be symbol for a lot of things, but for our purposes she represents two main ideas. The first is her status as a beloved fictional character. We are led to believe that she was summoned to this world because of how incredibly popular her anime was. And this isn’t hard to imagine given that she’s the main character of a magical girl show. She also serves as the shining beacon of optimism in the show. Despite all that they’ve done, Mamika will never stop trying to understand and befriend those in need – this being a central pillar in her character outline. She believes that no matter how dark it may seem, there will always be way through to the light.

Altair on the other hand seems to reflect Setsuna’s feelings. We know nothing about how Altair came to being in the world as she was, presumably, the first creation to be born into the world. She tells in this episode about how Setsuna was rejected by the world, how she was humiliated and ignored, despite only wishing to find a place to belong. Altair despises the world for its cruelty towards her creator and wishes return the favor, and in spades.

Now one important detail that came up in the conversation between the two was Mamika’s plea for Altair to move beyond the confines of her outline. She believes that they are not simply bound by the stories and world views that their authors have defined for them and that destruction doesn’t have to be the end result – she doesn’t have to exact that revenge for Setsuna. And that would be the final piece of the puzzle for me in figuring out what exactly this conflict meant.

Looking at the two outside the scope of the anime, I can’t help but see their real life counterparts. Altair is Setsuna, a person who’s had enough with the world and its cruelty. Bound by the limitations of her natural born abilities, she’s found no success and no way forward. With no one left to blame, she lashes out at the world and cries out for its destruction.

But Mamika sees a path forward. She believes that we can move past the confines of our abilities and find success in this big and beautiful world. She stands at privileged position but reaches out to Altair to show her the way to the light. Mamika is optimistic and successful, she’s empathetic and kind. So what happens when the two meet, and Mamika extends a hand to the downcast Altair? What does the show make of this clash in ideals?

Well, Re:Creators tells us this. 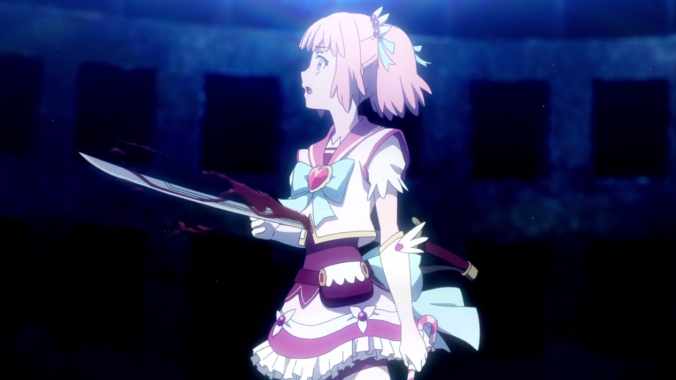 The show tells us that irreconcilable differences exist in the world. Sometimes, no matter how hard you try, you can’t break through to the person on the other side. The differences in position, ideals, talent, or even just mindsets can be enough to cutoff any hopes of resolution. And the natural result is conflict.

And that’s it from me. I could completely off base with this speculation, but hey it’s speculation! It’s always fun for me to think about what exactly is going through the author’s heads when their writing these kinds of things and I hope that it was half as fun to read. And yes, I realize how late this thing is. If you were wondering, I completely disagree with this final message – it’s just something I can’t quite believe. Let me know what you think in the comments below.

Anyways, I’ll catch you all later.

One thought on “Irreconcilable Differences”