Family is perhaps one of my most favorite themes in anime and fiction in general. These stories depicting the relationships between very different people tied together not by convenience, mutual material benefit, or obligation, but because of some inherently human desire stay connected to the ones we are close to, have always resonated with me strongly. But within this genre, one kind of familial relationship has always held a special place in me because of its importance in my life: the sibling relationship.

Siblings don’t need to get along and more often than not, they don’t. Two individuals with nothing in common other than lineage (if even this), forced to share the resources and love of their parents, forced to deal with each other day in and day out, and inevitably to be compared with one other by outsiders or themselves, it makes no sense at all why these relationships manage to persist, and yet miraculously they do. In fact, these relationships, forged over years of common togetherness are stronger because of all these difficulties.

2017’s been filled with many of these relationships in anime, including some glaring examples, and so in celebration of these unexceptional exceptions, I wanted to talk about some of my favorite anime sibling relationships from this year.

The conveyance of feelings through wordless communication makes up the bulk of A Silent Voice’s narrative, storytelling, and direction. There’s no understating the importance of this idea in the film but this incapability for words to capture the full extent of our feelings for one another is a very present and important one in close relationships, and this was especially the case for Yuzuru and Shouko.

Perhaps out of a consideration for her sister at a time when normality may have been the best medicine, Yuzuru never voiced her feelings of fear and sorrow over Shouko’s self-hatred and lack of consideration for her own life. She instead chose to take up photography of dead animals to scare Shouko away from her thoughts of suicide. Through her words, she provided support, and through her photos, her love for Shouko and her fear of losing her. These quiet considerations coming from a kid far too young to have to shoulder these responsibilities made me care so much more for these sisters.

Gyokuran Nanzenji was a wonderful addition to an already lovable cast of characters in The Eccentric Family’s second season. Asides from being all around amazing person, her relationship with the Shimogamo brothers was one that felt so immediately natural and familiar. In the few moments that Gyokuran shared with Yasaburou and Yaichirou on screen, it was clear that they’d been that close since they were children. Yasaborou visited Gyokuran when she holed herself up in the Nanzenji temple after the shogi fiasco and Gyokuran checked up on Yasaburou after he enraged Benten and went into hiding. These were just things that family did for each other, even though they weren’t officially family quite yet. Their relationship told us that the closeness of family can also be found outside of just blood relations. 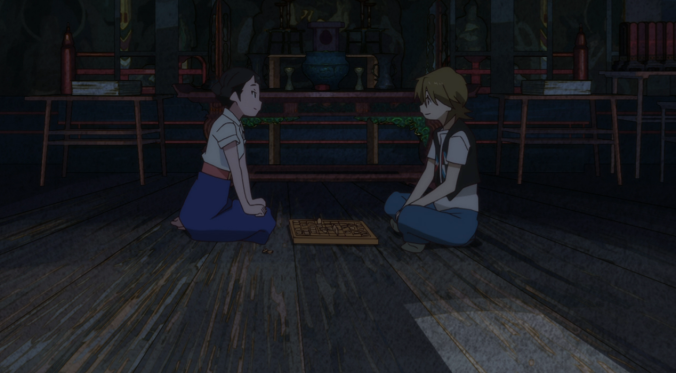 What was once broken

As dubious as it sounds, the sibling relationship that I wanted to spotlight from March Comes in like a Lion was that of Kyouko and Rei. I mentioned it once in one of my seasonal wrap-up posts from way back in the winter, but there was one scene in the first season’s 17th episode that really stood out to me and spoke to the feelings of sibling-ship buried within the two of them. 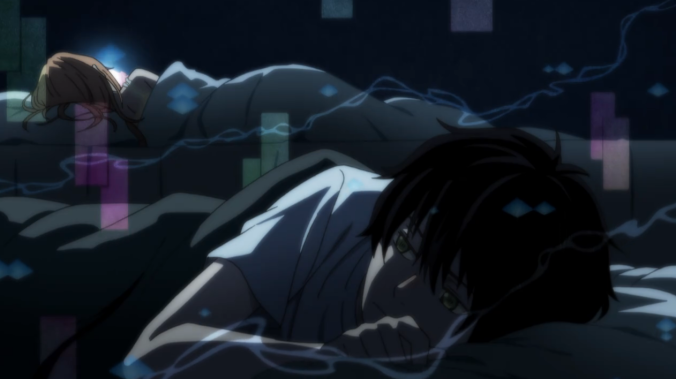 After having their confrontation interrupted by the Kawamoto sisters’ gift of food, the two went back to Rei’s apartment to have dinner. This scene, so inundated with comedy, was significant because it was the first of its kind between the two and yet their silly bickering never felt out of place. This chemistry of theirs was one that they once had before and all it took was a simple gift from a loving family to bring it all back. As toxic and as horrible as their relationship may be now, they were once siblings. Those feelings of closeness and familiarity, as powerful as they are in siblings, are still definitely there and that means that the possibility exists that they could be family again.

I’d be remiss not to mention the Kurosawa sisters in a post like this. Both Ruby and Dia’s characters were explored much more in this season of Love Live! Sunshine!!, which was great to see since these two were highly underdeveloped characters until now. In Ruby’s arc this season, we got see the depths of her and Leah’s love for their siblings on display. They were both younger siblings who were, in a sense, about to lose their older sisters. It’s easy as the younger one to develop a dependency on your siblings so when the time comes for them to move on without you, it hits pretty hard. But instead of quietly accepting their inevitable separation, Leah and Ruby decided to reassure their sisters that they would be fine without them through a performance – an ultimate display of their honest love for their irreplaceable siblings.

Bound together by intangible familial bonds, siblings will always be close, but the amount of that closeness that’s acknowledged is up to the person. Throughout the year I’ve been reminded time and time again of just how lucky I am to be a part of a relationship like these. To me, sibling relationships are irreplicable and carry with them value beyond anything that I could ever imagine. I don’t know where I would be without my older sister and seeing these relationships explored over the year makes me all the more thankful for having her in my life.

I’ll figure out a way to repay you someday, sis.

This is my eleventh of twelve posts that I’ll be publishing as part of the 12 days of Anime event. Be sure to check out all other amazing writers that are participating in this year’s event here.

One thought on “[Two] Siblings”