Volume five of The Combat Baker and Automaton Waitress was set to be released the day after my return home from Japan and upon hearing about this several days after my landing, I immediately jumped to buy the e-book so that I could read it as soon as I could. The previous volume had ended in a cliffhanger which of course largely contributed to the excitement I felt but as a fairly new series to me, I was surprised at how taken I was with it.

Although it was maybe a little less surprising considering that the story featured one of my favorite premises in fiction: robots finding love (romantic or otherwise). I’ve always found a kind of beauty in these stories with these sorts of initially empty characters discovering for themselves something worth living for and eventually expressing a kind of caveat-less passion the very thing that they’ve found. And to my delight, Combat Baker had this in bounds.

But not only this, the novel’s central relationship featured in it another uniquely excellent quality which was the real thing that kept coming back to this series – something that I like to call “the comfort in knowing”. 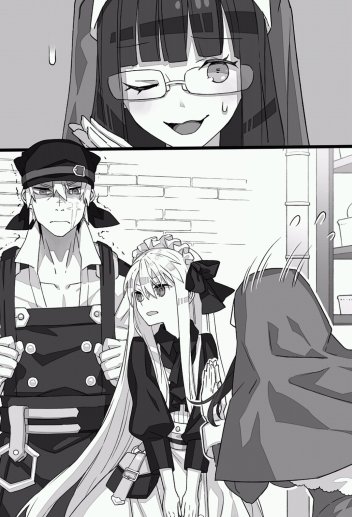 For a little background, Combat Baker tells the story of Lud Langart, a legendary war-hero turned baker after the end of the Great War. He was a part of a specialized unit of soldiers that piloted humanoid weapons known as the Hunter Units with the assistance of built-in AIs; his was given the name Avei. The two would go on to make history with their contributions to the war effort while also growing closer to one another as they fought together. With Lud’s departure from the military and the end of the war, Avei’s usefulness in the eyes of the military was coming to a close. And so they resigned themselves to a short future of waiting until their expiry – that is until they were given the choice to become human. Reborn as the female humanoid hunter unit, Sven, she set out to find her longtime partner to be with once again. Sven ends up working as a waitress at his small bakery and the story goes on with the two working together to bring the shop out of debt while avoiding the ghosts of their pasts that threaten to disrupt their peaceful every day.

The story often focuses on exploring the politics of their post-war which is something that I personally don’t care much for but with every new volume, there’s always this interesting return to their status quo of baker and waitress. Regardless of the impossible feats and unexplainable powers that Sven casually displays and the pair’s clear synchronization while fighting, the question is never asked and their relationship kept constant.

Of course, there is little doubt in either of their minds of the identity of the other but the subject is still never broached. Perhaps this is out of fear of rejection, or consideration for one another, but I see it as a kind of mutual satisfaction with the current state of things – a comfort in knowing that your longtime partner is, and will always be, right beside you – regardless of the circumstances.

It’s a kind of relationship that is, while mildly frustrating to see, is one that I’m enjoying reading about and I’m sure that the emotional payoff of their eventual confessions will just be that sweeter whenever it comes. If this sounds at all interesting to you, be sure to check Combat Baker out!

This is the second of twelve posts that I’ll be publishing as part of the 12 days of Anime event. Be sure to check out all other amazing writers that are participating in this year’s event here.