The fervent swinging of an ax and an ever-growing count mark the start of this story. Just two boys swinging away at an impossibly vast tree under the hot summer sun. The unfamiliar names and unrecognizable locale suggested a place far removed from the world we once knew until the utterance of a single name answers all questions as to where this story is set. 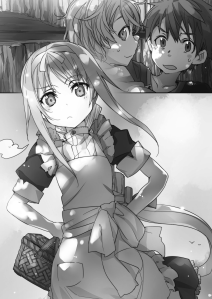 Years ago now, I read Alicization Beginnings from the insistent recommendation of a close friend and the quiet whisperings of a friendly neighborhood amphibian. It had been quite a while since I’d consumed anything SAO-related and jumping into this arc as I did, I really didn’t know what to expect from it. What I found was a fifty-page prologue of a story so incredibly different from what I knew of the series proper. Alicization’s introduction will forever be my favorite part of this first volume as it showed a different side to the unstoppable hero in black of my memory.

Recontextualized with a new lovely cast of childhood friends in Alice and Eugeo. Kirito was just another mischievous kid with an adventurous heart and a penchant for breaking the rules. He was still every bit the person we knew of from his past adventures just smaller, and more moe. It’s funny to say but, I feel like it was precisely this strange re-introduction that allowed me to even start to describe what kind of person he was in my mind. And this, of course, continued onwards with the rest of the arc. 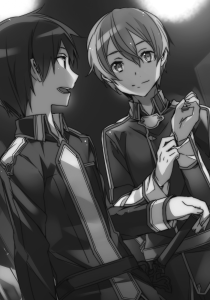 Alicization showed us the dorky, obsessive, game-lover that couldn’t go five minutes without showing his pupil a sword swing. Here was a kid that was irresponsible, lazy, and incomparably fearless. But a kid that was also all at once lonely, afraid, and unsure of himself. These sides to him, revealed with the help of his closest friend in Eugeo, made their journey so much more engaging. Eugeo as the foil to Kirito’s boldness was an incredible addition to the story and his growth under the watchful eye of his partner was a treat to see. Eugeo was, in Kirito’s own words, his first pupil and best friend – a person he couldn’t wait to proudly show off to everyone he knew. It was the kind of chemistry that added this extra heartwarming layer to their characterization: one that I’d thought I’d never see in the series.

This soft reset of Alicization made quite the shift in my perception of the boy in black and in the series as a whole – with my love for both increasing dramatically. This was the story of a world without the legacy of the black swordsman – both in canon and somewhat temporally in the context of the show. The series at this point was four years removed from its last season and one year past the movie. Alicization was funnily enough set up to be something of a soft reset for the anime series and I hoped for the best for the new viewers of this brand-new story.

It’s been well over a year since the anime’s premiere and while I personally maintain mixed feelings about how it all went down, it was a joy to see some fan reactions that echoed my first feelings for the arc. It’s far from perfect but this series is one that I hold quite dear now. These are characters that I wish the world for now which is something I couldn’t have ever said years ago and I’m happy to have been able to give them another shot. It’s a fun time being an SAO fan right now and I can’t wait to see what may come next.

This is post number eleven of twelve that I’ll be writing as part of this year’s 12 Days of Anime. Be sure to check out all other amazing writers that are participating in this year’s event here.