Woah what’s this? A second post outside the regularly scheduled 12 days of anime? 2020 certainly is a wild year. Hello, my friends and welcome to my attempt at trying something most ani-bloggers do within the first few weeks of calling themselves ani-bloggers: weekly episode write-ups. Oregairu’s final season is well on its way now and with my excitement for this finale as well as life finally slowing down a little for me (fingers crossed that I don’t jinx anything), now’s a better time than any for me to try something new. Hopefully, you’ll follow me in this endeavor alongside the wild ride that’s sure to be Oregairu’s finale.

Dyed in the familiar orange of the setting sun, the episode opens right where we left off. Five years may have come and gone since the end of Oregairu’s second season, but here, mere moments had just passed since Yui Yuigahama’s declaration of victory over the service club’s inaugural competition. And, the subsequent refusal of her convenient proposal.

The details of the drama of season two’s ending had surely left the minds of many an Oregairu fan who had not found the time to re-watch the series in time for this sequel. And that includes me despite having actually re-watched the series before its previously promised start date in the Spring. The season’s ending was, complicated, and certainly not complete as Yukino’s journey in finding direction for herself only started here. Of course, this was alongside the mix of desires, expectations, and emotions that drove the members of the service club to the point of needing to know what they all wanted to do, with or without each other, from here on out. This is where this final season began, with this question and with Yukino’s request.

Having waited for literally months for this premiere, I was overjoyed to see that the tension and emotions of season two’s ending carried over to this first episode. With such an emotional climax it just seemed right that what followed was a quiet awkwardness that dyed the first new scenes of the series in colors far contrasting the palette of season two. The evening grey and snow white set the scene for the long, silent tension between the group. At least until Hachiman – in a moment mirroring Yui in season two’s finale – broke the silence and connected the three. With the tension broken, what followed was a return to normal or at least as normal as could be given the circumstances. This scene was peak Oregairu in my eyes, everything from Yui and Yukino instinctual reaction to pay back Hachiman knowing how fussy he normally is, to Yui’s care in shifting the conversation back to neutral after sharing a moment of reminiscence with Hachiman, to Yukino and Hachiman digging at one another for falling short of each other’s expectations, spoke to just how much the three have gone through together. It was a light conversation but a heavy reminder of how close they’ve become. And this led Yukino to share a little bit about herself prompting Hachiman to then ask about her circumstances directly – something Yui had never been able to do before.

And this made a lot of sense. Yui, from the start of their odd friendship, had only ever taken small steps to move closer, being content with hearing bits and pieces over time as to never over push for fear of being pushed away. This leap was something that Hachiman could only ever do and there was no better time to ask than now. 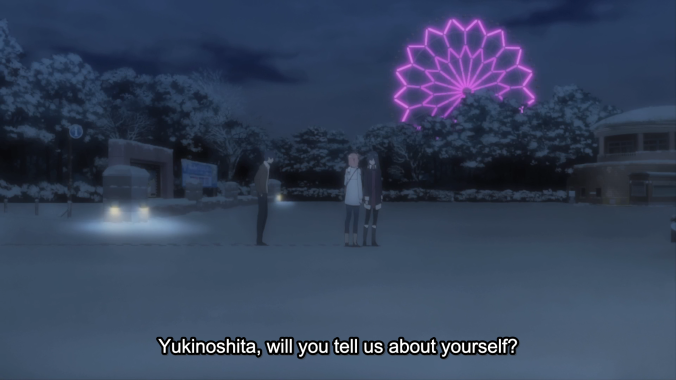 So, what did Yukino Yukishita want to do? Well at present, nothing, but in the past, she had a dream: to succeed her father in being a politician. But this choice never belonged to her. Instead, it had always been her sister’s responsibility, whether she wanted it or not. So what she wanted now was to figure out whether or not this old ambition of hers could still happen. And this meant speaking openly with her family about what they all wanted and expected from one another. Only then would she decide on whether or not to give up and then find another path forward for herself.

This was her answer, though largely in the context of her own family situation and her own future. It was an uncertain one at best and didn’t really answer any questions about what the trio would do with each other, but that answer fell more within her formal request to the club. She wanted Yui and Hachiman to see her through to the end of her decision to face her family. To support her, not directly, but in a way that only close friends could.

This dense first half of the episode was, like Yukino’s, an answer full of uncertainly to the question posed by the end of the last season of what comes next for the kids of Oregairu. Fortunately, the latter half was a lot lighter. The rest of the episode was dedicated to a double feature of the ends of Saki and Komachi’s character arcs. Saki’s was a bit of a restatement of her family’s unspoken courtesy towards one another as well as the quiet release of her feelings towards Hikigaya. It was cute and delightfully full of the excellent character acting and expressions that this adaptation is now known quite well for.

Komachi’s scene, while similarly light compared to the tension of the first half, was still an important capstone on Hachiman’s relationship and mutual dependence with his sister. Hachiman did a lot in the name of Komachi in season two and would undoubtedly continue to do a lot for his beloved sister. Her formal thanks to him, noted by even Hachiman as reminiscent of a daughter’s departure, was so that he could focus on doing things for himself, his club, and his friends, without having her as a convenient reason for it all. All-in-all a very heartwarming scene.

And that just about does it for the premiere. Oregairu’s only just started again and I already feel almost overwhelmed with all that’s bubbling just under the surface in this series. That being said, I’m still very happy that the show’s back and very looking forward to seeing what comes next. This was also a bit of a departure from the ideal episode write-up in my eyes and I suspect I’ll be mixing up the structure a ton throughout these long 13 or so weeks (assuming I make it that far) but I’m sure that it’ll be all worth it by the end to some degree.

Thanks as always for reading and I hope to see you all again sometime soon.