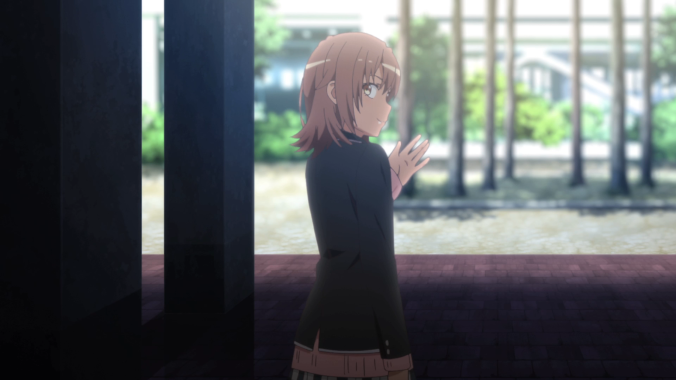 Welcome back once again to the pain zone! Or perhaps not? This week’s episode was surprisingly more on the lighter side but there was still more than enough to talk about in this one. So, without any further ado, let’s get started.

The episode opens like many others in the series with the warm tones of the setting sun. This particular after-school time is, as we learn, shortly after Hachiman’s brief conversation with Hiratsuka in the previous episode. There’s a flashback to this conversation of theirs but not very much more is revealed in their little exchange save for Hiratsuka sensei’s hesitation in mentioning something to Hachiman – something likely related to her, “A bird doesn’t mess up its own nest before it leaves” line. With the end of the series coming soon, and her problem children well on their way to figuring things out for themselves, Hiratsuka sensei’s departure does seem timely but when that moment comes it’ll surely be bittersweet for the kids of the service club.

This opening aside, the rest of the episode was significantly lighter than the previous two and I personally appreciated this a lot. Hachiman very nearly scores a date with Totsuka in their early morning chat and almost the whole gang gets together to congratulate Komachi and Saki’s brother (to a lesser extent) on their successful entrance into Sobu high. Komachi’s initial calm delivery of the news to Hachiman followed by immediately breaking into tears of happiness was both a great joke and an excellent example of their odd and heartwarming sibling relationship. Yui and Yukino (by proxy) being the second on the scene to congratulate Komachi really brought home how close and important they have become to Komachi as more than just friends of family and this was lovely to see.

What came next was what I can only describe as yet another one of Iroha and Hachiman’s odd back and forths. Ever since season two the pair had built up a great kind of chemistry matching Hachiman and Yukino’s from very early on in the series and this was the proper return of it in season three. Tangents were had, significant emotional damage was done, and Hachiman was once again roped into something he never signed up for: helping out with the prom preparations.

If I had to describe the mood of this particular episode, I would call it “a strange kind of consideration”. Upon entering the student council room and announcing his reason for his arrival, Yui and Yukino noticeably pause and apologize for having to make him help out. The Yukino of old would have certainly assumed that his free time elsewhere would’ve been wasted anyways but what we got instead was a sincere apology for taking up a couple hours of his day. This, alongside the supposed “overprotectiveness” of Hachiman in regards to Yukino, spoke to how much things have changed between the three in the time that’s passed since the early days of the service club.

So, what even is a prom? Hachiman asked, in so many words. It came as a slight surprise to me last episode that the idea of prom was a strictly western thing, but it made a lot of sense with a little extra thought. I would describe it as a graduation dance with a couple recurring clichés and it appeared that the show agreed, for the most part. Their plan was to get a bunch of people in suits and dresses and dance around as a sort of introductory video for what their prom would be like, with Yukino and Iroha being the spotlights.

It was a fun setup for what would be a rather light and service-y half-episode, but I came out of the whole thing with a lot of feelings for a lot of characters. For one, Iroha’s apology for involving Hachiman felt, once again, in line with this strange consideration-through line of the episode. Sure, she may have invited one too many people to help but her apology to him felt much more significant than her slipup necessitated. Perhaps she just wanted to show her seriousness with how she wanted to conduct herself now but given how perceptive she’s been with the atmosphere of the service club, it’s hard not to see it as her desire to include Hachiman in the festivities with the Yui and Yukino despite their desire to respect his space. 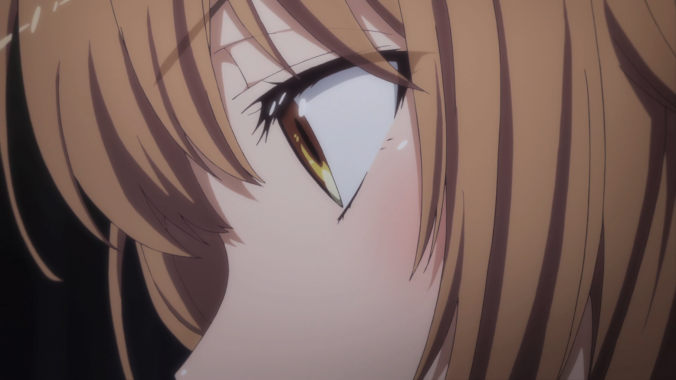 The second was of course Yui and the entire lead up to her short moment together with Hachiman. Yui was just so pretty this episode, despite making what was probably the weirdest face she has ever made in the series. And of course, this was the intended effect. She wanted to look her very best for the sake of memories that she would never forget, and the moments that followed with Hachiman would certainly be that. The pair’s walk to the door together saw Yui with an expression of happiness, slight embarrassment, and the subtlest hint of melancholy.

Their dance together was amusingly contrasting, with Hachiman’s visible discomfort on full display while Yui was just enjoying the moment. Unlike him, she was far beyond that initial feeling of awkward embarrassment. His self-deprecation was just so extremely him and Yui knew the very cause of it was his genuine nervousness for the situation. Luckily for him though, the slow dance section ended almost as soon as it began and what followed was the highly optional freestyle dance portion of the evening. Despite its claim to know very little about the western prom tradition, Hachiman’s decision to stand on the sidelines and observe all the action at the end was one of the most accurate depictions of prom that the show could ever hope to capture. 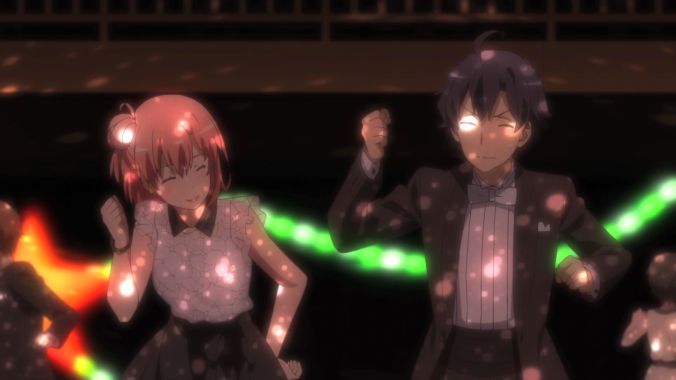 And that just about wraps up the episode! This one was a nice breather after the last two weeks of residual season two heaviness but I now very feel ready for whatever the show may throw at us next. I’m looking forward to next week and I hope you are too.